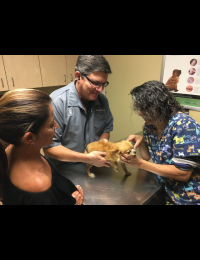 Dr. Roberto Rodriguez- Dr. Rod is the owner of South Lake Animal Hospital. He graduated in 1984 from Kansas State School of Veterinary Medicine. After graduation he returned home, Puerto Rico, and worked as a relief Doctor. Seeing the need of mobile clinics in the island, he started a Mobile Clinic assisting sick pets at their homes. In 1986 he bought an established Clinic from a retiring Doctor, Baldrich Animal Clinic in Hato Rey, P. R. He worked there for 12 years until he decided to relocate to Florida along with his wife, Tequi and his four children, Roberto, Juan Carlos, Pablo and Ana. He worked at Sand Lake Animal Hospital in Dr. Phillips for two years and then bought South Lake Animal Clinic from Dr. Roberson which had been established in Clermont in the 1970’s. In 2008 the Clinic was completely renovated and doubled in size and changed it’s name to South Lake Animal Hospital. Although it is busier than when he started, he is known for treating all his patients as if they were his own. He is a caring and compassionate doctor who strongly believes in the pet human bond and understands the important role pets play in their human family.